Destination
Arrival
Departure
Manaus (Amazon River)
4/18/2022
4/18/2022
The capital of the State of Amazonas, the belle époque splendor of Manaus is still evident in the graceful mansions and the Teatro Amazonas opera house. This city, resting on the Rio Negro, was created by the rubber boom of the mid-19th-century, when steam navigation opened up the Amazon to entrepreneurs and the social elite. Today, stroll down the Parisian-styled boulevards and Italian piazzas, or watch the fisherman at Municipal Market unload their catch of the day on the river’s edge.
Boca dos Botos
4/19/2022
4/19/2022

The little Indian village of Parintins lies beside the river on Tupinambarana Island, amid the largest archipelago of the Lower Amazon. The community can trace its history back through two centuries and still proudly celebrates its traditional Indian culture. On a shore visit you will be entertained at a special recreation of the villagers' annual 'Boi Bumba' festival, featuring some truly spectacular costumes and unique traditional music.

Today, Santarem is one of the Amazon’s most important trading centers, and is rich in legend and nature. The town is situated at the point where the Tapajos and the Amazon waters meet. This is called the “Wedding of the waters” and is one of Santarem’s major attractions. The lakes and forests of this area are home to numerous species of birds, particularly the white egret.

A quiet town on the Rio Mamore, Guajara hosts an annual festival in mid-August known as the Boi-Buma festival, which is a recreation of a larger celebration in larger areas of Brazil.

Many travelers begin their Amazon experience in Manaus, Brazil. Others begin at the "end of the line", in Belém or Macapa, where the Amazon flows into the Atlantic Ocean.

In addition to being site of France's satellite launching base, French Guiana is perhaps best known for the infamous penal colony to which convicts and undesirables were deported from France. For a long time the small archipelago (the Safety Islands) was known by the name of "Devil's Island." The three islands - Devil's Island, Ile Royale and Ile St. Joseph - are about one hour by boat from the mainland. Their notorious convict settlements were built in 1852. On the almost inaccessible Devil's Island, political prisoners like Alfred Dreyfus were held in isolation. The prisoner who became most famous was doubtless Henri Charrière, who was immortalized in the movie "Papillon" for supposedly being the only convict who managed to escape from "the Green Hell." Of 80,000 prisoners sent to the islands, some 50,000 died here. Visit the prison ruins or the Kourou Space Centre. 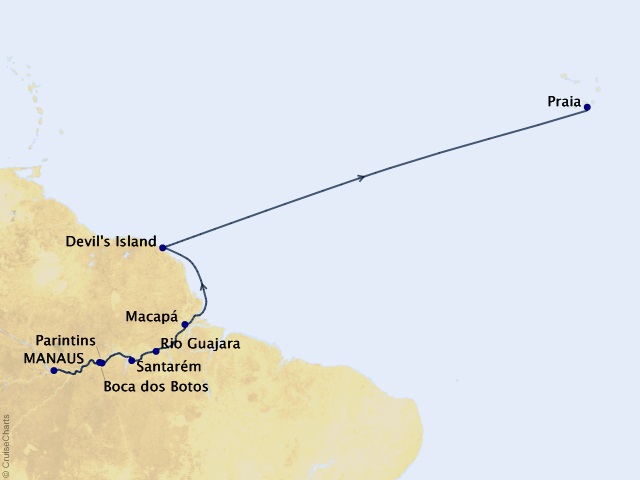 Itinerary subject to change without notice. Please confirm itinerary at time of booking.

Prices are per person, based on double occupancy. Airfare, transfers, government fees and taxes are additional unless otherwise noted.

All fares are quoted in US Dollars.

All prices per person and in USD unless otherwise stated.
Offer ID:
1351842

Reference this number when contacting our agency so we may better serve you. Also keeping this number handy will allow you to locate this document again quickly.

Information and pricing is subject to change without notice. While we do our very best to ensure that information and pricing appearing in this website is complete and accurate, we cannot be responsible for incomplete and inaccurate representations, which may or may not be under our control. In the event of a pricing error, misrepresentation or omission, we reserve the right to adjust the pricing or make any other corrections.