*Amenities may not be combinable with all fares shown. Additional restrictions may apply.

Have It All Package Available for Purchase – Includes Shore Excursion(s), Drink Package, Specialty Dining and Wi-Fi

*Promotion is subject to availability, may not be combinable with certain fares or other amenity offers, is capacity controlled and may be withdrawn at any time. Other restrictions apply.

READY TO PLAN YOUR SHORE EXCURSIONS?

Yokohama is located on the southern part of Honshu Island, on the western shore of Tokyo Bay, and is our gateway to Tokyo. It has excellent harbour facilities and is one of the leading ports industrial centres of Japan. There are numerous shrines, temples, and Christian churches and a number of beautiful parks. A small fishing village in 1854, Yokohama was almost totally destroyed in 1923 by an earthquake. Gradually reconstructed the city is now among the most modern in Japan. It was heavily bombed in 1945, during World War II.

This large, bustling port is the starting point for tours to the ancient cities of Kyoto and Nara, the cultural fountainheads of classical Japan. Kyoto's Old Imperial Palace and the shogunal Nijo Castle remain glorious symbols of the power the city held for over 1,000 years. Until 1868, Kyoto was the capital of Japan, filled with elegant timber buildings and, perhaps more than any other Japanese city, imbued with Kami, the divine spirit. You'll sense it everywhere, for there are hundreds of Shinto shrines and over a thousand Buddhist temples, as well as sacred treasure-houses of religious sculpture, painting and exquisite gardens. Nara, City of the Seven Great Temples, lies in an idyllic setting.

Kochi has beautiful lagoons and lakes and offers travelers an extraordinary setting for a stay of a few nights.

HALF DAY HERITAGE TRAIL - A WALK THROUGH KOCHI

Hiroshima in southwestern Honshu has grown rapidly as a commercial city, and after 1868 it was developed as a military base. Every August 6 since 1947, thousands participate in multidenominational services in the Peace Memorial Park built on the site where the bomb exploded. After the war the city was largely rebuilt, and commercial activity gradually resumed. Visit the Peace Park but also explore Miyajima Island and its colourful shrines and mysterious forests.

Korea's "museum without walls" is akin only to China in its depth and cultural wonder. From Pusan, you can journey to the ancient Silla capital of Kyongju, a dynasty which reigned in Korea for almost a thousand years. Today this small provincial town is virtually a museum without walls, dotted with many splendid ruins. Nearby, the forested mountains and valleys shelter hundreds of beautiful Buddhist shrines including the renowned Sokkuram Grotto, and Tongdosa and Pulguksa Temples. Pusan is also a shopper's mecca and Korea's vital southern link to Japanese and American trade.

Sakaiminato is a city in Tottori Prefecture, Japan. Sakaiminato is well-known for being one of the biggest fishing towns in Japan, it specializes in fresh sea food and tourists love to try out their famous and delicious king crab. The city has a multitude of tourist attractions which include visiting museums, a famous wooden lighthouse, or you can simply enjoying an ocean view picnic at the beautiful Sakai Dabai Park

Toyama
4/7/2024 8:00:00 AM
4/7/2024 5:00:00 PM
Only a 3 hour train ride from both Osaka and Tokyo lays the more than 400 year old city of Toyama.  Visit Toyama during the spring months to experience the beauty of the blooming cherry blossoms in Toyama-joshi-koen Park.  Encircled by the Matsu-kawa River and located in the remains of the famous Toyama Castle, Toyama-joshi-koen Park is a very popular place for visitors to take a relaxing walk or cruise.  Other points of interest in Toyama include the Botanic Gardens and the Museum of Modern Art.
Niigata
4/8/2024 8:00:00 AM
4/8/2024 5:00:00 PM

Niigata has a long history as a port and is distinguished for being the site of one of only five international ports opened in 1868 when Japan resumed contact with other countries after nearly 250 years of self-imposed isolation. Since that time, Niigata has developed into one of Japan's most important modern international ports.

Geographically, the city is distinctive in that it is surrounded by water. The Shinano and Agano, two of the largest rivers in Japan, run through the heart of Niigata before emptying into the Japan Sea. In addition, until relatively recently, the city was crisscrossed by a series of canals used to transport goods. Although the canals have been filled in to make the construction of modern roadways possible, the willows that lined these canals still remain today and now serve to lend a gentle air to the bustling downtown area.

Although Niigata has grown into an important regional center of activity, the city has pursued a plan of careful development in order to preserve its traditional culture, natural environment, and distinctive local character. When Niigata is mentioned, many people often think immediately of the area's delicious rice and sake or the city's beautiful sunsets, but the residents of Niigata themselves take pride, rather, in the spirit of hospitality and community that so distinguishes the city.
Following this tradition, the city's long held goal has been to create a society where every citizen is valued and allowed to shine. Numerous cultural and civic facilities support the activities of local groups and organizations. In addition, Niigata's conscientious system of social welfare seeks to preserve the dignity as well as the well-being of all of the city's residents. The city is constantly trying to tackle society's problems in progressive, innovative and caring ways.

Otaru is located on Ishikari Bay of the Sea of Japan on Hokkaido Island. With a name meaning "sandy beach", Otaru developed as a modern town in the late 19th century. Provided with a good natural harbour, it is the port for the city of Sapporo, the largest city and capital of Hokkaido Island and site of the 1972 Winter Olympics. Visit the Asarigawa Spa, Otamoi Park, and the Otaru Aquarium, one of the largest in Japan. Sapporo, laid out in 1871, features wide, tree-lined boulevards and some beautiful Botanical Gardens incorporating the Ainu Museum and Sapporo Art Park. The Sapporo Beer Garden and Museum and the Historical Village of Hokkaido are also well worth visiting.

The fan shaped city Hakodate was once an island but now straddles a sandbar linking it to the mainland. Sites worth visiting include Mount Hakodate (cable car), the Old Public Hall, the Russian Orthodox Church and Goryokaku Fort. Nearby is the Onuma Quasi-National Park and Mount Komagatake.

Yokohama is located on the southern part of Honshu Island, on the western shore of Tokyo Bay, and is our gateway to Tokyo. It has excellent harbour facilities and is one of the leading ports industrial centres of Japan. There are numerous shrines, temples, and Christian churches and a number of beautiful parks. A small fishing village in 1854, Yokohama was almost totally destroyed in 1923 by an earthquake. Gradually reconstructed the city is now among the most modern in Japan. It was heavily bombed in 1945, during World War II. 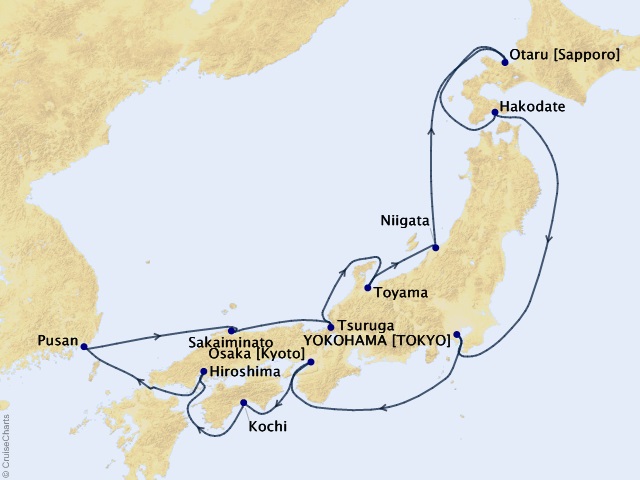 Itinerary subject to change without notice. Please confirm itinerary at time of booking.

Rates are cruise only, per person, based on double occupancy. Taxes, Fees and Port Expenses additional for all guests. Fuel surcharges may apply. Please ask your travel counselor for details. Rates are subject to availability and may change without notice. Restrictions may apply.

Prices are per person, based on double occupancy. Airfare, transfers, Taxes, Fees and Port Expenses additional.

All fares are quoted in US Dollars.

All prices per person and in USD unless otherwise stated.
Offer ID:
1462921

Reference this number when contacting our agency so we may better serve you. Also keeping this number handy will allow you to locate this document again quickly.

Information and pricing is subject to change without notice. While we do our very best to ensure that information and pricing appearing in this website is complete and accurate, we cannot be responsible for incomplete and inaccurate representations, which may or may not be under our control. In the event of a pricing error, misrepresentation or omission, we reserve the right to adjust the pricing or make any other corrections.